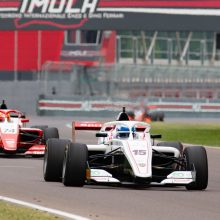 An intense weekend at Imola

The fifth stage of the FIA F3 Regional – European Championship took place at Imola. It has been a unique weekend because there has been four races instead of three; the extra one has been fitted in the schedule as a “recovery race” for the one that was not disputed at Vallelunga because of the weather conditions. Matteo Nannini had two nice qualifying sessions, reaching the sixth place (for Race 1 and Race 3) and the seventh-place (for Race 2). The Italian driver was not completely satisfied because he felt like he could have done more. In the first race, Matteo managed the pressure of keeping everyone behind him, and he showed his strength and potential. He finished the session in the sixth place, just as he started. On Race 2 he managed to overtake the driver starting in front of him, reaching once again the sixth place. A slow start, caused by the overheating of the clutch system, conditioned Race 3. Despite that, Matteo drove incredibly well, and he delivered a comeback to the eighth place. A small contact during of on the many overtakes he made has been sanctioned with a 25 seconds penalty, canceling much of the […] 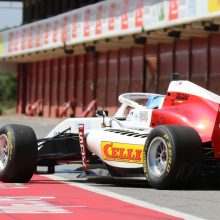 A developing session in Barcelona

The team performed two important test days on the Catalan race track, in preparation for the official racing weekend on September 22nd.  The technical staff, along with Matteo Nannini, conducted several tests on the car during the first day. The time at their disposal has been exploited to gather essential data on the brand new F3 Tatuus and to carry out some technical tests. Despite the study on the car, Matteo managed to obtain some great lap times. On the second day, the team focused more on performance research, and Matteo was able to reach the best lap time overall with 1:40.594. On several sessions throughout the day, he also managed to stay a few tenths of seconds close to the other drivers. Both the team and Matteo are satisfied with the work carried out on the Spanish track. 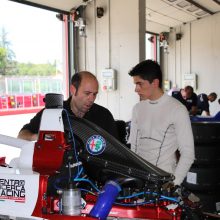 The testing day goes well for Nannini at Imola

The team and Matteo Nannini took part to a collective test in Imola, training for the racing weekend of September, 1st on the same circuit. Matteo showed his talent by achieving the best lap in his group’s session and the fourth-best lap overall, despite the fact that he was driving on the track for the first time in his career. Matteo Nannini “We had a very positive testing day, reaching P1 in 6 out of 8 sessions of my group. It was my first time on this track and everyone consider it to be one of the most difficult in the championship. Every session has been harder than usual because there were many cars on the track, but that also leaves an edge for further improvements. I would like to thanks the team for the fantastic job they performed.”